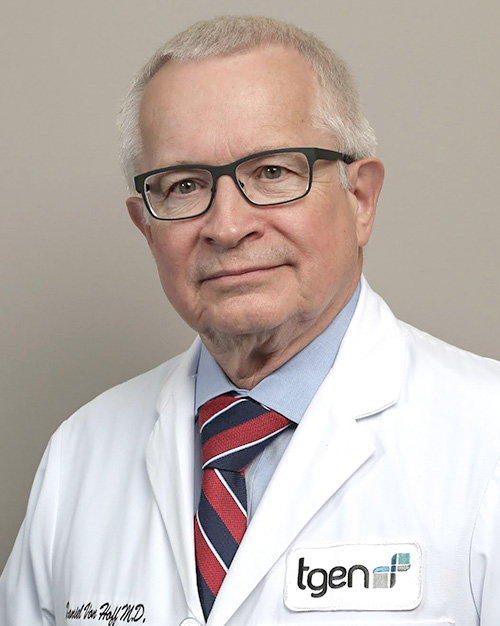 Dr. Von Hoff’s major interest is in the development of new anticancer agents, both in the clinic and in the laboratory. He and his colleagues were involved in the beginning of the development of many of the agents we now use routinely, including: mitoxantrone, fludarabine, paclitaxel, docetaxel, gemcitabine, irinotecan, nelarabine, capecitabine, lapatinib, vismodegibm, nab-paclitaxel, nal-IRI, and others. At present, he and his colleagues are concentrating on the development of molecularly targeted therapies for patients with pancreatic and other advanced cancers.

Dr. Von Hoff has published more than 690 papers, 140 book chapters and over 1400 abstracts. Dr. Von Hoff received the 2010 David A. Karnofsky Memorial Award from the American Society of Clinical Oncology for his outstanding contributions to cancer research leading to significant improvement in patient care.

Dr. Von Hoff was appointed to President Bush’s National Cancer Advisory Board in 2004-2010. Dr. Von Hoff is the past President of the American Association for Cancer Research (the world’s largest cancer research organization), a Fellow of the American College of Physicians, and a member and past board member of the American Society of Clinical Oncology. He is a founder of ILEX Oncology, Inc. (acquired by Genzyme after ILEX had two agents, alemtuzumab and clofarabine, approved by the FDA for patients with leukemia). Dr. Von Hoff is founder and the Editor Emeritus of Investigational New Drugs – The Journal of New Anticancer Agents; and, past Editor-in-Chief of Molecular Cancer Therapeutics. He is a co-founder of the AACR/ASCO Methods in Clinical Cancer Research Workshop. He is also proud to have been a mentor and teacher for multiple medical students, medical oncology fellows, graduate students, and post-doctoral fellows.

Read Bio
Back to SAB